A double-drug therapy offers the best hope yet for thousands of Britons with cancer of the oesophagus.

New trial results suggest that patients given the immunotherapy medicine tislelizumab alongside chemotherapy are likely to live much longer than those given chemotherapy alone.

The drug, taken as an infusion every three weeks, can increase survival time by 50 per cent in patients newly diagnosed with late-stage disease, with some patients living for up to two years after treatment.

Mr Richard Hubner, a consultant oncologist at The Christie NHS Foundation Trust, said the drug could herald a ‘step change’ in how oesophageal cancer is treated – although it still has to be appraised by the NHS spending watchdog.

He added: ‘If a treatment like this is rolled out widely, it will be of real benefit to many patients. I expect this to happen within a year.’

About 9,000 Britons are diagnosed with oesophageal cancer every year.

Patients’ chances of survival are often poor as symptoms, such as a persistent cough, heartburn and difficulty swallowing, often only appear late, once the cancer has already spread. 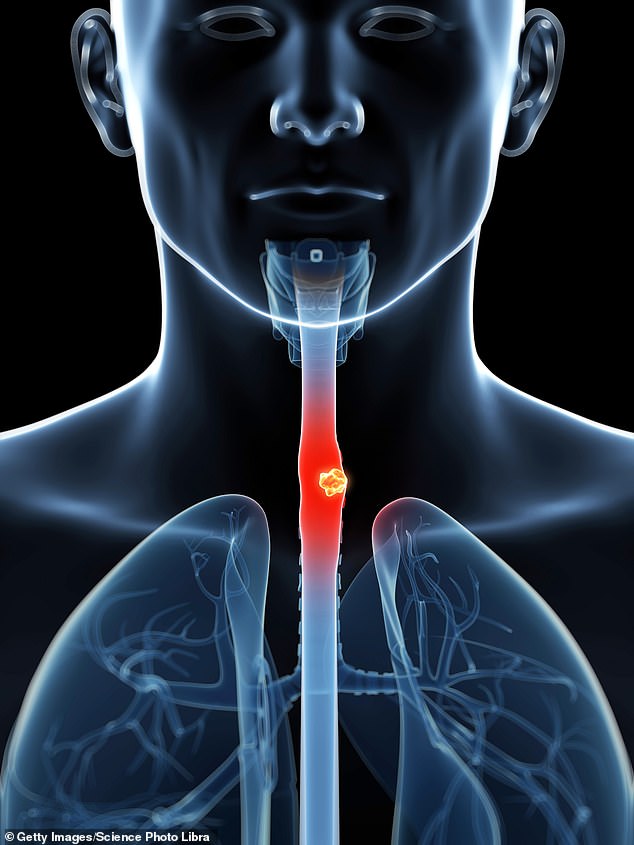 Mr Richard Hubner, a consultant oncologist at The Christie NHS Foundation Trust, said the tislelizumab drug could herald a ‘step change’ in how oesophageal cancer is treated – although it still has to be appraised by the NHS spending watchdog (stock image)

One in the eye from Red Sea jaws

After swimming in the Red Sea, a man developed a mysterious droopy eye.

The 52-year-old sought medical help about a month later and a scan revealed a small lump had formed in his eyelid. But when doctors operated to remove it, they found two transparent tubes, each roughly an inch long.

Biologists later confirmed the reason for his droopy eye – a fish bone, specifically, the jawbones of a halfbeak – a common fish in the Red Sea.

They probably became embedded in the German’s superior rectus – the muscle that moves the eye upwards – when he collided with the fish. He made a full recovery.

As a result, fewer than half live for more than a year after diagnosis.

The new drug combination is for a type of oesophageal cancer called squamous cell carcinoma, generally found in the middle and upper part of the food pipe, making up roughly 25 per cent of cases.

Most frequently found in patients aged over 70, the risk is increased by smoking and heavy drinking.

It occurs when cells that line the food pipe, called squamous cells, mutate and begin to multiply uncontrollably, causing tumours to develop.

If the cancer is caught early, surgery can remove the diseased part of the gullet.

However, if it has already spread, a cure is less likely.

Instead of an operation, these patients are given chemotherapy to relieve symptoms and control the spread.

Tislelizumab is a type of immunotherapy drug known as a checkpoint inhibitor.

It works by blocking a protein called PD-1, found on tumour cells, which helps cancers to evade the immune system.

By blocking PD-1, tislelizumab highlights the tumours, enabling the immune system to seek out and destroy them. At the same time, the chemotherapy directly attacks the cancer cells.

In a recent trial of the drug, 649 patients were given either tislelizumab with chemotherapy, or chemotherapy alone.

Those on the drug combination survived for an average of more than 17 months – significantly longer than those given chemo alone, who lived for 11 months on average.

There is a risk of side effects from taking the drug, including anaemia and tingling in the fingers. More severe side effects, caused by the drug dampening the immune system, include gut inflammation. However, this is rare and can be managed by taking a short course of steroids.

There is a fascinating reason why most women keep a full head of hair into old age – unlike the majority of men.

It’s all to do with hormones.

Most male balding happens because hair follicles shrink as they are exposed to too much dihydrotestosterone – a by-product of the male sex hormone testosterone. As the follicles get smaller, they stop producing hair.

Kathleen Occleshaw, 73, from Standish in Wigan, took part in a trial of tislelizumab at The Christie in 2020 after being diagnosed with advanced oesophageal cancer.

The widowed great-aunt-of-four has been on the drug ever since and remains cancer-free.

The retired social services worker was diagnosed by chance during a routine medical appointment when doctors noticed a lump on her neck. It turned out to be advanced oesophageal cancer that had spread to the lymph nodes.

Kathleen was given six months to live, but was offered a place on a trial of the new drug. After starting treatment in March 2020, she continued taking the drug after the 18-week trial came to an end and has been on it ever since.

She says: ‘I had a CT scan every six weeks and gradually the tumours got smaller and smaller until they became difficult to see.

‘After eight months, the doctor came in one day and said there is no evidence of any disease anywhere in your body – it was just amazing.

‘I’ve been so lucky to have no nasty side effects. The only issue I’ve had is some mild tingling in my hands and feet.

‘I definitely hope more people will get access to the drug. I’ve been on it for two-and-a-half years when I was given six months to live – that’s got to be worth something.’